Cannabis Inhalers: Are They Effective?

You are here:
Industry news

ollowing on the heels of more widespread cannabis legalization has come a multitude of ways to consume the versatile plant, like edibles, concentrates, dry herb vaporizers, and many more. One such innovation is the advent of the cannabis inhaler. Similar to inhalers used for asthma, they deliver a discrete and precise dose of cannabis compounds CBD or THC. Cannabis inhalers offer a combustion-less consumption experience that could be perceived as safer than other methods, like vape pens (especially given the recent vape cartridge crisis) and smoking joints, which comes with many unpleasant side effects, like the inhalation of smoke – known to contain hazardous chemicals like carbon dioxide and particulates. And don’t forget, every time you light up you’re inhaling some of the chemicals from your lighter, like butane. But are cannabis inhalers effective?

CBD and THC dosed precisely in inhalers is believed to help those with lung conditions like asthma or COPD (chronic obstructive pulmonary disease). Some studies have shown that THC delivered via inhaler can act as an effective bronchodilator that works as well as known asthma inhalers Albuterol or Ipratropium for one-to-two hours.

Bronchodilators are very important for the treatment of asthma, a serious and potentially dangerous lung disease that inflames and narrows lung airways, causing shortness of breath, tightness in the chest, wheezing, and difficulty breathing. Bronchodilators can relieve these symptoms by relaxing the muscle bands that tighten around the airways, and clear mucus from the lungs.

A New England Journal of Medicine study found as far back as 1973 that inhaled cannabis caused bronchodilation (though particulate matter from smoke can be a lung irritant), saying, “Marihuana smoke, unlike cigarette smoke, causes bronchodilation rather than broncho-constriction [narrowing of the air passages], and, unlike opiates, does not cause central respiratory depression [i.e. a decrease in breathing}.”

It is believed that cannabis activates the CB1 receptor, present in the peripheral and central nervous systems, and inhibits the contraction of airways.

It is also thought that the activation of the CB1 receptor reduces pain, hyperalgesia (heightened sensitivity to pain), rheumatoid arthritis, and chronic pain. Some medical patients prefer using cannabis inhalers because they are discrete, smokeless, virtually odorless, and won’t call any undue attention to your marijuana medicine of choice because cannabis inhalers closely resemble regular inhalers. One benefit of cannabis inhalers is that they are thought to have a higher bioavailability, which refers to the degree and rate that medicine is absorbed and its effects felt.

Cannabis Inhalers on the Market

Though cannabis inhalers have yet to make a big impact in cannabis markets, there are a couple of THC inhalers available at dispensaries in Colorado, including the AeroInhaler and the Santana Smooth (yes, that Santana, the inhaler is named after the song “Smooth,” the 1999 hit collaboration of Santana and Matchbox Twenty singer Rob Thomas). Designed to dose precise hits of THC and terpenes, these inhalers are not necessarily for those looking for a euphoric high due to their precise dose delivery. However, THC, despite its party-boy reputation, is thought to have many healing properties, like pain and inflammation reduction, appetite stimulation, and the reduction of nausea and vomiting. 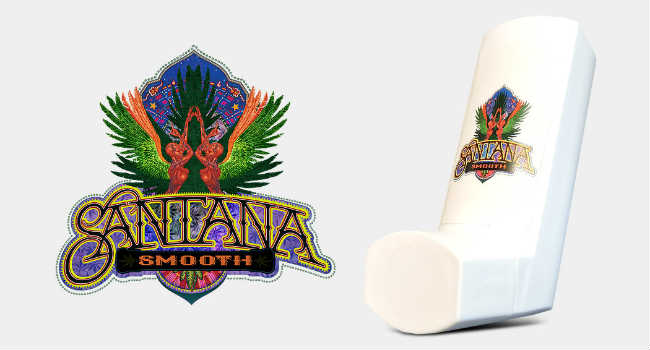 The Santana Smooth inhaler is sold at several dispensaries in Colorado. photo credit

Other inhalers on the market are the CBD-only Maven Hemp, the Vapen Clear, which offers THC, THC/CBD hybrids, as well as CBD hybrids, and the CBD Luxe. Right now, cannabis inhalers are not the cheapest option on the market, retailing from an average of $50-100 for 100 puffs. By contrast, even more expensive vape pens top out at $40-60.

So, is it worth it to pony up the extra cash for a cannabis inhaler? That depends. If you, as a consumer have been concerned by the illnesses and deaths related to vaping, finding a consumption method that feels safe is important. Or if you are a medical patient with asthma, COPD, or other lung illness, using an inhaler can provide quick and discrete access to medicine that won’t upset your lungs.

Everything You Need to Know About Cannabis Inhalers
June 1, 2021

A Guide to Cannabis Inhalers for Healthier Consuming in Colorado
June 1, 2021